From Nubiana, With Love

About a week and a half ago, I nearly passed out with excitement while straightening my hair and getting ready for school, because I found out that I was one of the VIP contest winners for 1D Orlando. Yes, you are reading this correctly. A 21-year-old with a bachelor’s degree and real-life things to do almost got a concussion from knocking her head against her bathroom counter because of British boy band One Direction. Let me tell you about the fairy tale I got to live in for three days, as well as how my life has now been ruined by 1D. (Or you can be really concerned/disturbed and leave this page)

I’ve (almost) always been a fan of One Direction, since the end of the X-Factor days. I bought their songs on iTunes. I bought physical copies of their albums. I watched their Youtube videos and movies. I attempted to beat out billions of 16-year-old girls on Live Nation every time they announced Florida tour dates. I failed every time, but my dignity remained in tact. Until last year. I sat on my laptop in class last fall and beat a bunch of 16-year-old girls to get floor seats for the Where We Are Tour (but hey, I still graduated). This was it. I had finally succeeded, and I had great seats. When my friend and I finally made it to the show in Tampa, we didn’t know what we were in for. We thought we were just going to be in the presence of good music and the occasional joke. The big joke was actually on me. By the time I left the stadium, I was completely obsessed with One Direction. There was no going back. I no longer tried to hide it on my social media networks, and no longer cared what my friends thought about my obsession. Right after the end of the tour, they announced that they were going to come to Universal Studios Florida to celebrate the release of their next album, Four.

Naturally, I had to be a part of it. I was willing to camp out for days in order to see their Today Show performance (which the fandom later learned that Universal was having NONE of it). I looked into every single option and every single contest I was eligible to enter. I finally won. I have no idea how it happened, but I am very grateful to have gotten the opportunity to have experienced it as a contest winner.

Sunday, 11/16
Sunday was the day that all of the winners (from around the world) arrived. We checked into the hospitality room at Universal’s Cabana Bay Beach Resort and got awesome goodie bags. I’m not even going to pretend that I wasn’t excited about the 1D nail polish and lip glosses that came in my bag. There was an album listening party at the pool that night, which was pretty cool for all of the people who came from out of town. I’m not going to lie, the real star of the show was the frozen raspberry lemonade that the winners got free coupons for. My friends and I tried to get back to our suite early to get sleep for Monday, but who were we kidding? Try forty-five minute nap.

One Direction basically invited all of Orlando to their taping of the TODAY Show from 7-10 am that Monday morning. And all of Orlando (plus many other states and countries) actually showed up. The contest winners got to have breakfast at The Groove in CityWalk which was greatly appreciated, and then we lined up for the show. The boys were awesome even though Zayn Malik’s dreamy voice was noticeably missing. Between my screaming, frantically waving the ugly sign I made, and singing my heart out, I actually made it on television. Everyone was given a three day, two park pass to Universal/Islands of Adventure which my friends and I meant to use after the taping, but we were way too exhausted and passed out until the last possible moment. We got food and headed back to our group’s meeting spot for the media event at Universal later that night.

I don’t want to give too much away about the media event (even though Twitter has already put two and two together), but it was very cool and I’m excited to see how it all comes together during the One Direction Christmas Special on NBC on 12/23. I got to chat with Louis Tomlinson for a bit which was amazing, and I wish I could recount the conversation, but his presence was a surprise and as a result, my soul left my body for that bit. You might get to see all of that go down on television. The other lads were filming other things with different groups of contest winners so it was an exciting night for everyone, plus we got to ride some of the best rides at Universal and Islands of Adventure. 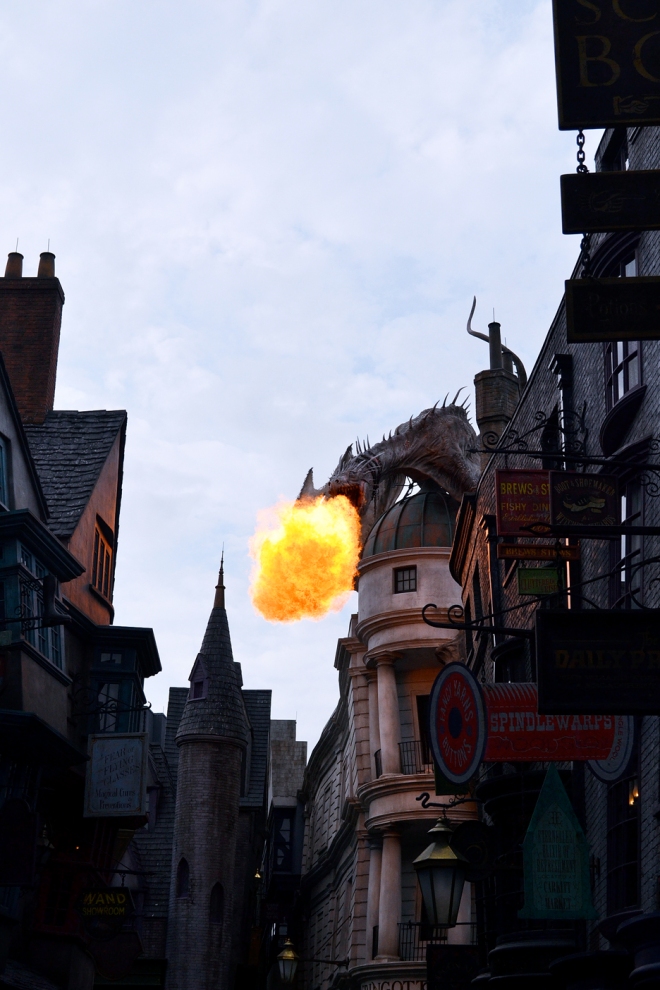 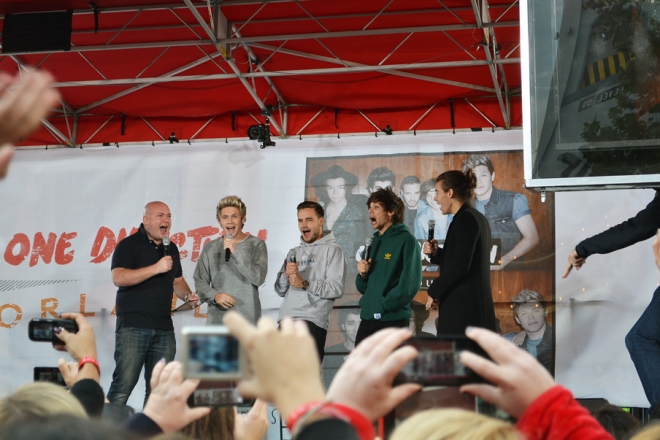 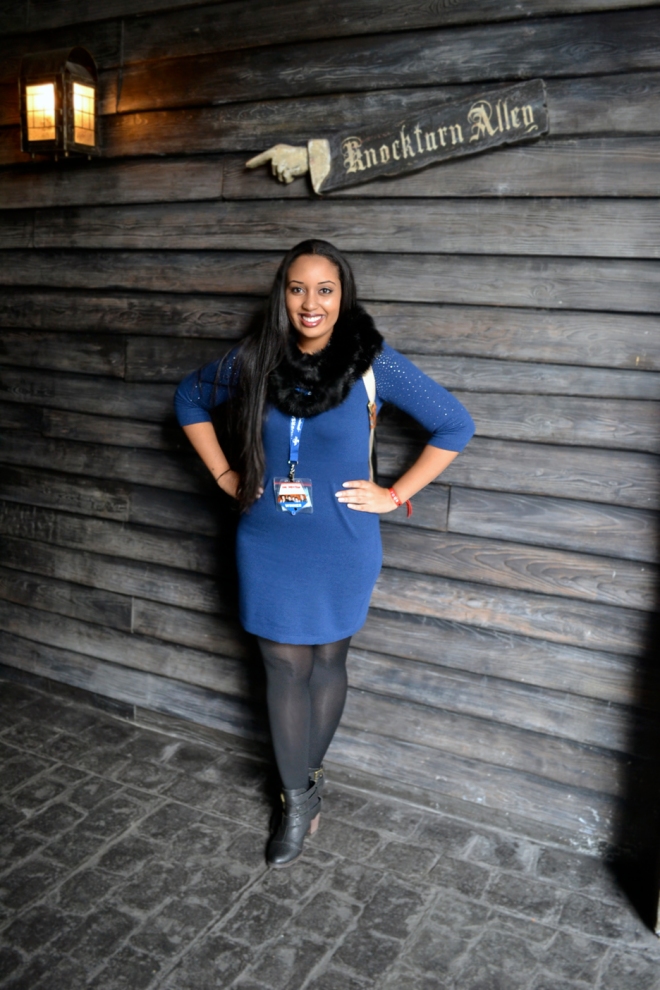 On Tuesday we had more freedom and flexibility with our itinerary, so I decided to check out the new Diagon Alley before heading over to the 1D Orlando events. I was completely blown away by everything… Escape from Gringotts and the Hogwarts Express are definitely my top Universal Studios recommendations! I also went a little crazy taking pictures, but I wanted to keep that moment forever. You really feel like you’re in the books/movie the whole time.

Later on, the contest winners got to go to a fan Q&A where the boys answered some of our questions. They were charming as always and it was unreal being so close to them. It actually took me a little bit to realize that I wasn’t at home watching an interview on YouTube, I was witnessing what millions (billions?) of girls would be replaying on YouTube just moments after. After having some pizza (to help us cope with the most interesting guys in the world leaving us, obviously), we waited to see the One Direction version of Universal’s Cinematic Spectacular. It was brilliant and I wish I had gotten better pictures of everything.

Before we knew it, the moment we were waiting for, but also weren’t waiting for (since it was the last official event of the extended weekend) came. The private performance. The very private performance that I originally couldn’t get tickets to because I was in school and couldn’t get to the bank in time before it sold out. The private performance that everyone wanted to be at. It was freezing and everyone was underdressed, but no one cared. God had blessed us all with Zayn Malik’s presence after it was revealed that he never made it to Orlando for the TODAY Show due to a stomach bug. What had I done to deserve this? I was screaming and jumping up and down like I once did for Jesse McCartney when I was eleven years old. I had made it to the second row from the stage of a One Direction concert and I was loving every second of it. Except when Harry Styles threw his water at the crowd and it landed on my hair, which took an hour and a half for me to straighten. How dare you ruin the right side of my hair, you beautiful man. The boys were just as funny and delightful as they are on television. They were very interactive with the crowd and I felt myself spiraling out of control. I was falling for each member of One Direction so quickly, all at once. We were there in the cold for three hours, and Harry Styles’ dimples and lack of coordination made us forget all of our worries. (I do have pictures and videos from soundcheck but out of respect for the filming of the Christmas special, I won’t post them on here)

Wednesday, 11/19
I woke up and realized that the dream I somehow landed in was now over. On my way to class, the only thing going through my mind was:
Does it ever drive you crazy, just how fast the night changes
Everything that you’ve ever dreamed of
Disappearing when you wake up

Since then, I have not been able to get any of the members of One Direction out of my head (or my heart). My life will never be the same. I might as well sign all of my future paychecks straight over to 1D. Thank you, One Direction, NBC, Universal, and everyone else involved for giving me the best/worst experience of my life. It was definitely 1DAF.

All photos in this post are mine. Please notify and credit me if you wish to use them. I am not affiliated with One Direction or NBC/Universal in any way, just a very lucky fan!

Started using the @caudalieus products I ordered a
Here’s one of the outfits I was going to wear in
Can’t go to Paris, so I’m bringing Paris to me
Last picture taken before quarantine...I remember
My nails looked like this approximately one lifeti
Swipe for the drama 💚
Follow on Instagram

Hi! My name is Nubiana, and I’m a Trinidadian-American fashion, beauty, and lifestyle blogger showing you how to take the ordinary and make it extra. I would love for you to follow along on this journey with me! xo